After our little sojourn into app dev yesterday, it's dropping back to infrastructure today to talk Persistent Volumes (PV's) and Persistent Volume Claims (PVC's). For the uninitiated, a PV is like your big disk, and each PVC claims a certain part of that, kind of like a folder. It turns out that my analogy, and knowledge of PV's and PVC's was very wrong - see addendum below While all the kids these days love talking about 'ephemeral' and 'stateless' apps, having some amount of persistent storage is useful for a variety of usecases - not least of which is for an Image Registry.

So, it was time for PV's, but what which one to choose? Given that my cluster is running on RHV, I could spin up a drive or some space on there, but that seemed a little complicated in many ways, so my eyes turned to my NAS... well, it does have 'Storage' as part of it's acronym... I have a Synology DS218+ to hold media, but it has plenty of spare space on it, so lets get adding an NFS share to it.

The Synology documentation gives a really good overview, and following that I carved out a 50GB share, tied to the subnet of my lab. There are many other authentication options that can be used, but for now I'm going with simple (complexity can be added later.) 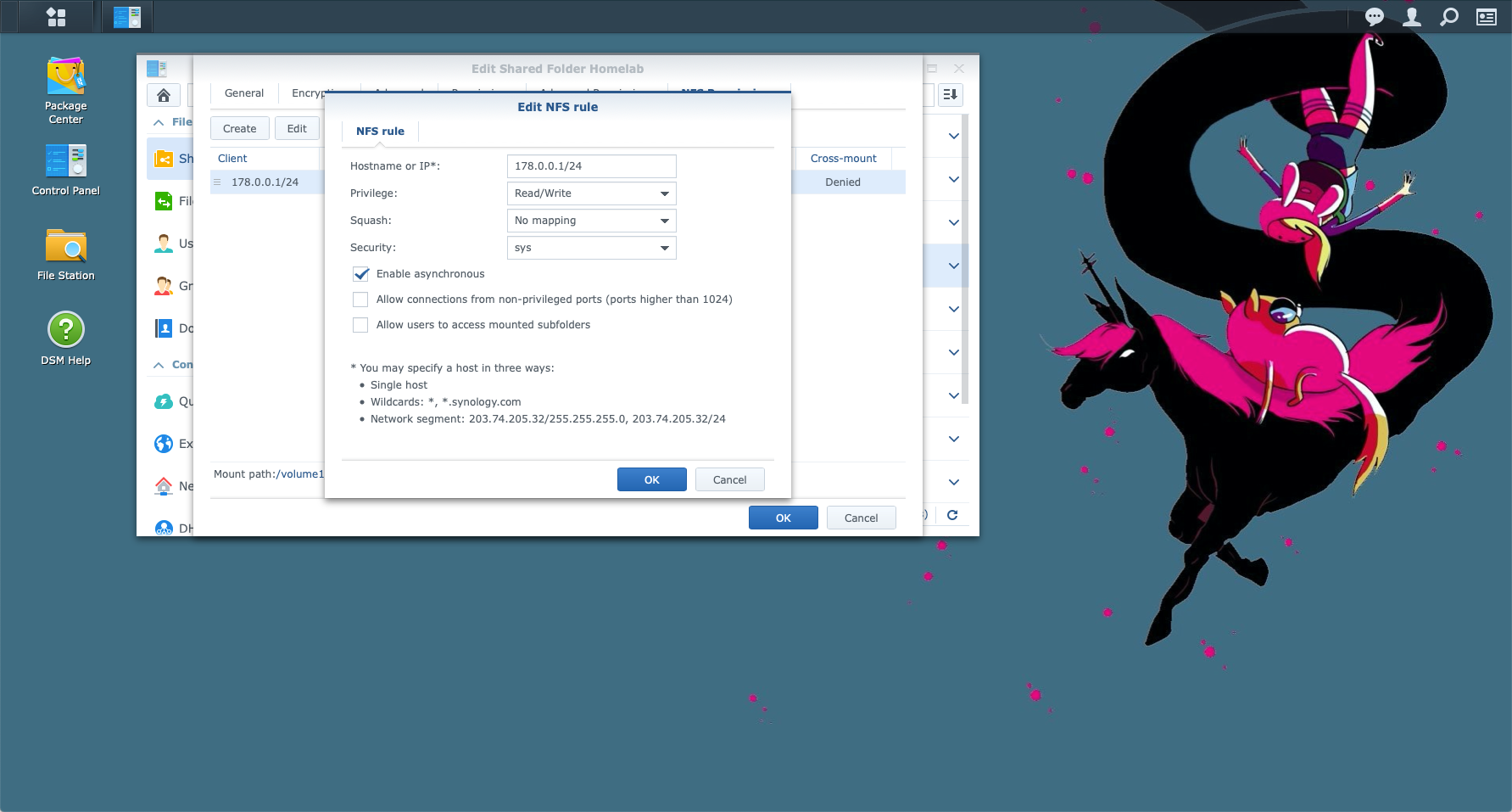 This will create the volume with the name synology, that is pointing to my NFS mount point (/volume1/Homelab on 192.168.0.200). The reclaim policy is set to Recycle so that space is freed up when a claim is deleted. This can also be set to Retain or Delete if required. In my case, I was keeping it simple so largely left things as default.

This is creating a claim called synology-pcvc-images and I'm specifying that it is 5GB in size. I also add storageClassName: slow to help reference it back to the PV created before. Saving the YAML file and waiting a few seconds should leave you with a result similar to below, with my PVC Bound to the correct PV. 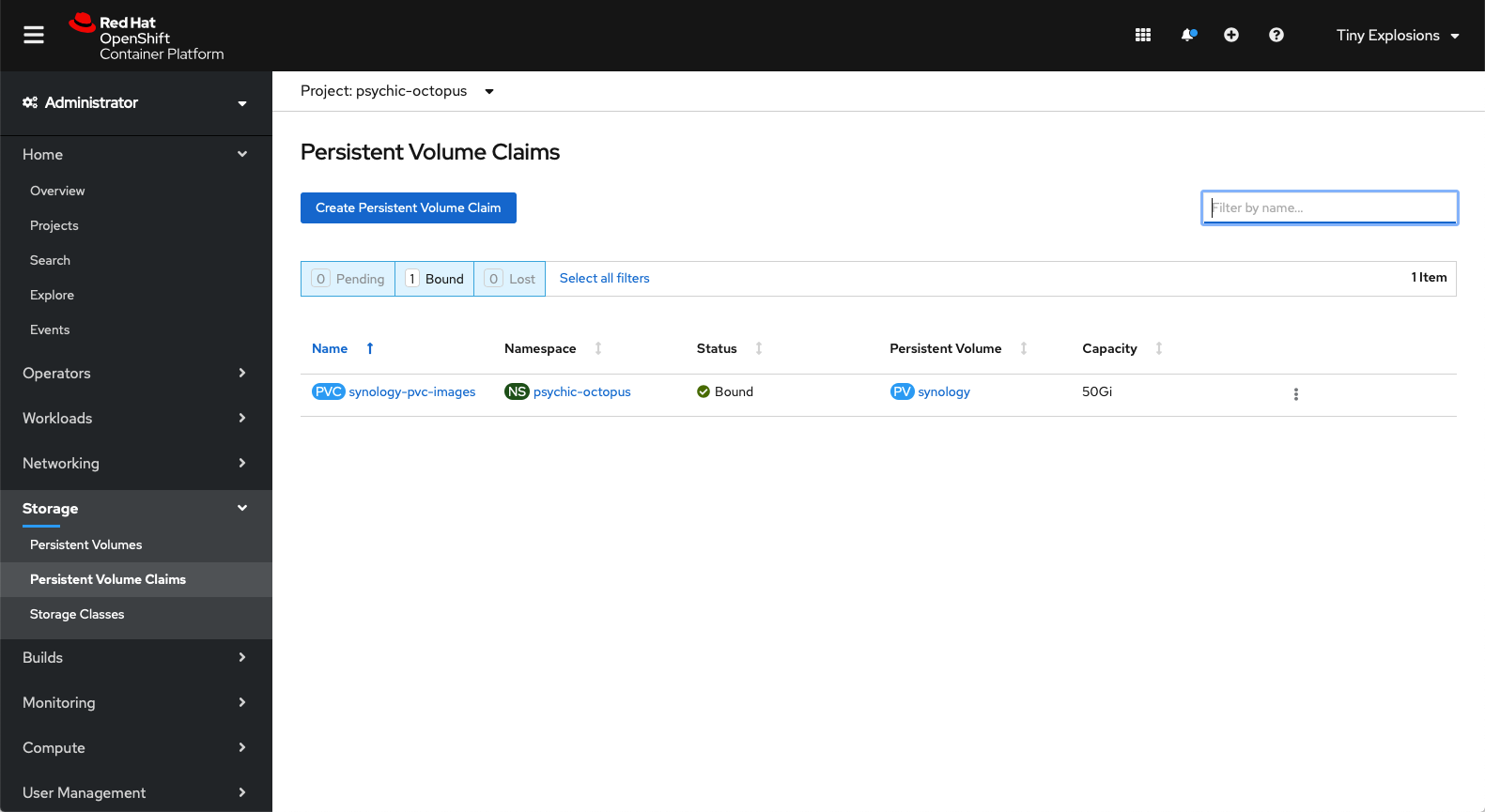 You might notice in the screenshot above that it is a little misleading. Or at least, it was to me before checking with a colleague. The 'Capacity 50Gi' looked very wrong - that was the entirety of the PV, but I had only specified 5Gi in my configuration. It would seem that this little nugget refers to the face that it can expand up to 50Gi if it needs to, but verifying the YAML for the claim shows that 5Gi is correctly specified as it's size.

So there you have it - my cluster is now able to save stuff on my NAS - maybe the next step is hooking the claim up to the image registry... look out for that in a future installment.

It turns out, like so many things in life, that storage in OpenShift is not as easy as I might have thought, or the above might have led you to believe. In fact, PV's and PVC's have a 1 <-> 1 relationship, and so in my example above, all I have done is created a 50GB folder for my images. Useful, but certainly not the intention when I set out. If I wanted more 'folders' or space for applications, using the method above I would have to create more PV's and more PVC's.

What I actually intended to do was to provision dynamic storage, probably through a StorageClass but it turns out this doesn't currently exist for NFS. So some more research is required on this one.